Posted at 07:30h in EDGE announcements by Brett Neuling
Share

Passive House, so long a byword of sustainable architecture, is taking off around the world. With greater numbers of passive certified buildings appearing in Europe, the USA and Australia, the movement is gaining real momentum.

For our latest blog, we’re covering a brief history of Passive, its basic concepts and how it works.

Passive House as a formalized concept began in Germany in the late 80s. This is where it was named: “Passivhaus”, meaning passive building. The idea was to use intelligent building design to cut down the amount of heating energy as much as possible .

Some examples of this concept in architectural action are: 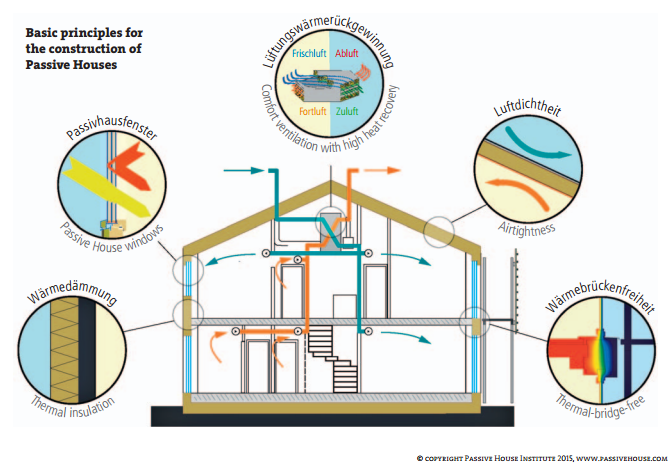 When all of these elements deliver to the right levels, the result is a building largely unaffected by external conditions. A Passive House is capable of maintaining its interior at a comfortable level (typically 20-25°C) naturally.

Even though most modern architecture does include an energized means of heating or cooling the building, this is largely for freedom of temperature-control for the occupants. The devices themselves are also typically far smaller than equivalents found in other houses.; standard Passive Houses use only around 1/20 the heating and cooling energy of similar non-Passive models.

As a German concept, it is no surprise that the vast majority of completed Passive Houses are found in Germany and German-speaking regions, as well as colder regions such as Scandinavia. There, it is mainly celebrated for cutting down heating costs in winter, eliminating cold air drafts and providing great acoustic isolation.

However, Passive House as a concept is independent of climate and region, and we are increasingly starting to hear it spoken about in Australia. There are slightly different challenges here: Australian energy costs are as much (if not more so) due to cooling in summer as they are to do with heating in winter.

There are also greater construction costs for Passive Houses here. In Germany, Passive design has become so commonly accepted that Passive buildings are only 5-7 per cent more expensive to construct. In Australia, as in most other places in the world, we still have a long way to go before our costs drop to this level.

However, the more interest shown in a product and the greater the number of people who get on board, the further prices will drop as the supplies and knowledge for construction becomes readily available. And the more environmentally-friendly design is taken up in Australia, the better, we think. Here’s to a greener, cleaner, more sustainable future.