11 Feb Schools of the Future

EDGE Architectural is proud to be a part of several ‘Schools of the Future’ projects across inner city Melbourne. Melbourne’s population continues to grow. Its high density means the need for smart, well-designed facilities continues to grow, too. Traffic, public transport, businesses, and public amenities cover most of the area, so new ideas had to be placed on the table. Traditional schools were no longer an option for numerous classrooms, sporting grounds, and performance areas. That’s where the ‘Schools of the Future’ comes in. By building vertical schools, developers can focus on constructing medium rise vertical schools in limited space. They can also increase the pedagogy by installing new and sustainable facilities. 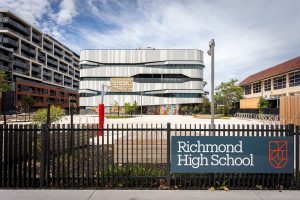 Richmond High School is a prime example. It is the first vertical government school built in Victoria and won Best Secondary School in the 2019 Victorian School Design Awards. Local architectural firm, Hayball, prioritised certain elements such as “community, diversity, wellbeing, sustainability, safety, technology and ensuring learners are at the centre of everything”. The Griffiths Street campus is built over four levels with state-of-the-art facilities and access for science, technology, and the arts. This includes an outdoor learning deck and horticultural garden, a performing arts centre and outdoor amphitheatre, an outdoor art deck, and various learning areas. Over at Gleadell Street, the facility incorporates four netball courts and one indoor court, with showers, toilets and canteens. By spreading the school into two campuses, Richmond High has prioritised modern learning and accessibility for students within the inner city area. 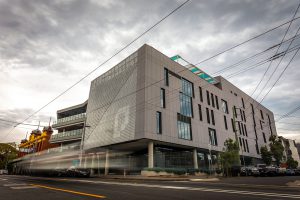 Another example is Prahran High School. Sitting between High and Thomas Streets, architecture practice, Gray Puksand, made use of their limited space by deciding against a standard “straight up-and-down cube”. Instead, they extended Prahran High School to the boundaries on all sides, creating two “slipped and shifted” planes around a central void that exposes spaces to natural light. The four levels of the school provide advanced learning facilities, including teaching communities, a theatre space, a library, a rooftop canteen and garden area, and a full-sized gymnasium. This encourages an open and informal learning environment while also supplying services for other educational institutions to take advantage of.

With more plans to build vertical schools across Victoria and Australia, it seems there will be further opportunities to improve our country’s education system and focus on creating better learning environments for students.

Browse our project page to see how EDGE Architectural contributed to building these Schools of the Future.