Posted at 08:20h in Architectural frames by pamela
Share

Recently, members of Team EDGE attended a review session on the properties and benefits of 3M’s VHB tape. Gavin and Anthony from 3M provided updates and reviews on the tape, its applications and its testing performance.

Although adoption of the VHB tape for glazing has been slow in Victoria, other states in Australia have been more open. The tape boasts a more than 20 year history of structural glazing in Brazil, a country with a similar UV profile to Australia. Recently, 3M conducted testing on buildings glazed in Brazil decades ago to demonstrate the resiliency in the tape, and its flexibility and tensile strength. The results were very positive.

While the VHB tape is an adhesive on a roll, it’s not really a tape. It’s a durable visco-elastic material with flow and elastic properties. In other words, it’s not foam that’s been coated with adhesive, the whole lot is adhesive. The foam doesn’t rip apart, but rather stretches, allowing it to absorb energy and withstand wind loads. 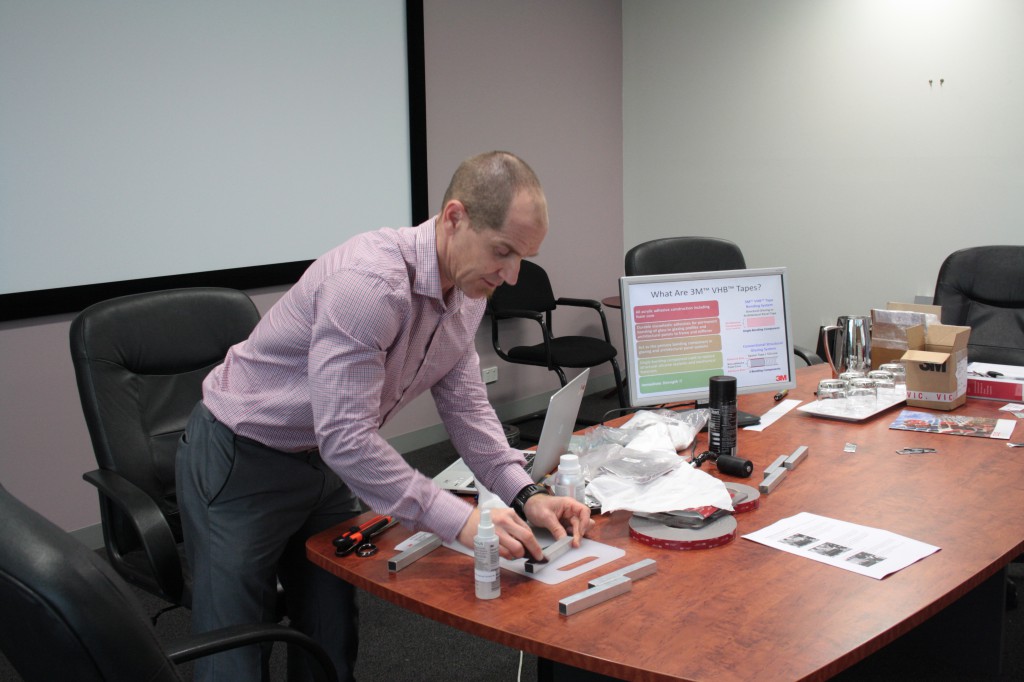 One key benefit of VHB tape for structural glazing is the immediate strength. It’s a physical process, with no chemical change to gain strength. Due to the viscous nature of the material, molecules flow and find the nooks and crannies of the metal. It achieves 100 per cent strength in 72 hours. Frames go from factory to site quickly, with no need to store frames in the warehouse. Additional benefits for fabricators include reduced fabrication time, improved productivity, faster project completion, fewer process steps, reduced waste and no major two-part equipment to buy and maintain.

3M is an important facet of the EDGE Ecosystem and we value Ai’s relationship with the company and EDGE Architectural’s role as an early adopter/proponent of VHB tape for structural glazing in Australia.

Any enquiries can be directed to edge@capral.com.au.