With engineering and design features that deliver what today’s forward-thinking architects want, EDGE is the only option for architectural window systems

Many stories contribute to the history of EDGE Architectural Glazing Systems, including the story of Aluminium Industries – its past, present and vision for the future, the story of architectural window and door framing systems in Australia, the story of industry professionals frustrated by “me too” systems that just recreate the same flaws as their predecessors, and the story of collaborative, innovative development over two years.

A foundation of service and support

During the next five years, the company focused on developing into a total solutions supplier with particular emphasis on value adding processes for our customers.

Inspired by an industry’s history of imitation

Part of the development of the EDGE Architectural ranges can be found in what we didn’t want to do – namely, what most everyone one else continued to blindly do.

Commercial window systems were introduced into Australia in the early 1960s and featured the imperial dimensions of “4 inch x 13/4″. In 1966 Australia metricated; our window systems did not.

Later, as deeper frame depths were required, hard metric frame depths became available and nearly all distributors followed each other. Today, 50 years later, “101.6mm x 44.4mm” is still the most widely used system and original glazing methods haven’t changed. The result is wide spread incompatibility and fudged sizings throughout the industry. Few products are actually fully compatible with each other.

Ai began developing architectural window and door systems in 2005. Jim Gallagher, Managing Director, recognised the changing marketplace and decided future growth and success would come from innovation and change. Through a process of continuous development and improvement, our aluminium product offerings have since grown to become one of the largest and most comprehensive set of commercial ranges in Australia. Ai committed to the ongoing development of this innovative aluminium window and door framing range by establishing the EDGE Architectural division in 2013. Our philosophy is simple: to offer creative, streamlined and efficient solutions, without compromise.

In 2011, Rod Beel, a 40-something year industry professional, joined the team as Ai’s Research & Development Systems Manager. Rod spent decades frustrated by the Australian window systems industry’s lack of innovation and he seized the opportunity Jim gave him for complete Greenfield design of systems. Over “make do” systems, Rod envisioned the concept of a “super suite” years before and he quickly set about seeing it realised.

Our break from the past

Our product development criteria was not to simply add another suite of sections to our existing range, but to use the opportunity to re-engineer our complete architectural product and service market offer. Our R&D team worked with two of the world’s leading experts in thermal barrier technology in Italy and the US. Through this collaboration and consultation with our customers, we designed and developed a system that has been scoped to work “up” through a thermally broken range and “down” to incorporate conventional double and single glazed systems including window and door elements. The result was an emerging new integrated range, a “super suite”, that incorporates a range of new and improved features from thermal break to advanced water shedding.

And, of course, a true metric footprint. 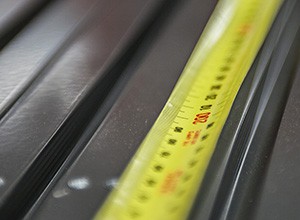 Aluminium commercial framing and door systems originally came to Australia in the early 1960s from the US. They were released as an imperial dimensioned frame and other suppliers adopted the same footprint, with maybe a slightly different glazing pocket. The name “400 series” comes from “4 inches”.

Australia metricated in 1966. Here we are, more than 50 years later, and they’re still selling the same product in imperial dimensions. What other products do you specify or buy today that haven’t changed in 50 years?

EDGE Architectural’s design and performance meet current Australian standards and aesthetics. This includes maintaining a true metric footprint across all suites allowing systems to be mixed and matched as the engineering or design purposes indicate.

Don’t settle for last century’s window systems. Talk to a member of our design team about using EDGE in your next project.