29 Jul Open to EDGE in Melbourne

Posted at 08:52h in Architectural frames by pamela
Share

A couple of projects featuring EDGE Architectural window framing systems opened their doors to tours and talks during this past weekend as part of the City of Melbourne’s Open House Melbourne.

University of Melbourne, Faculty of Architecture, Building and Planning

As the Faculty of ABP building nears completion (8 August is the practical completion target date), the University opened it up to the public with guided tours from 10am to 4pm on 27 July. If you missed it, you can see the images we captured on the EDGE Architectural project portfolio. Or, you might enjoy the construction time lapse videos the school maintains on their YouTube channel.

You’ll have another chance to check out the building and its interesting architectural features next month. The building will be open for University of Melbourne Open Day, 17 August 2014 with tours and events planned. Faculty staff will be relocating to the new building during October and November 2014.  General access will commence from 1 December 2014, with official launch events occurring from 10 to 12 December.

Library at the Dock 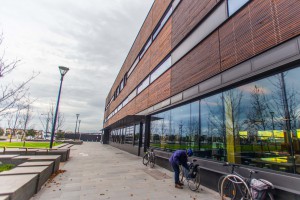 “The City of Melbourne has set ambitious climate and environmental requirements for its operations and the library will set the standard for future public buildings within the municipality, helping us to evolve into a truly sustainable city.”